Newbiggin-on-Lune is surrounded by history. The immediate neighbourhood offers several fascinating archaeological sites and relics. Right across from Cranesbill Barn is a small building that used to be a village bakehouse – left over from a time of communal village life. Just over the main road is the site of St. Helen’s Well, which never runs dry and used to have a chapel on the mound next to it. A little further up the fell is one of the most extensive iron-age settlements in England. Called Severals, it contains a complex set of walls and earthworks that give a fine impression of how native people before the Roman occupation lived, worked, and protected themselves. Just below Severals you can walk along the track of the former South Durham and Lancashire Union Railway. 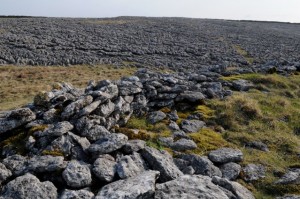 If you are into prehistoric monuments, this is your place. Orton and Asby Scar between them hold an extraordinary concentration of relics from the prehistoric past. These include, besides Severals, the settlements of Ewe Close and Holborn Hill, and mounds known as the Giant’s Graves, and the Hollin Stump.  In addition, Castle Folds above Orton is set among a fascinating expanse of limestone pavement. It could be medieval or earlier. Each of these monuments bear witness to human occupation and land use in very remote times. 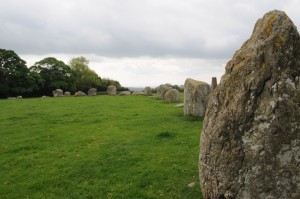 We have our own local stone circle at Orton. If you travel just a little further, you can find two magnificent and famous stone circles. Castlerigg, in the Lake District, stands at the foot of Blencathra. Long Meg and Her Daughters, fully 100 metres across, is located a few miles northeast of Penrith and looks out onto the Eden Valley and Cross Fell. It is a great druidic structure, and is among the finest in England.

Another ancient feature that’s well worth exploring is the Roman road near Orton. This section connected forts at Low Borrowbidge in the Lune Valley and Brougham near Penrith. The route remained in use for many centuries. Just to the side of this route, at the topmost spring of the Lyvennet valley, is a monument marking the spot where the future Charles II fed and entertained his army on the way south in a bid to challenge Cromwell. Today, it is a lonely spot surrounded by bogs, limestone outcrops, heather, and shooting hides – but it once was a highway to the north.

Those are just the more unusual historic things. Wherever you go, you will find yourself surrounded by barns, old houses and dry stone walls; each beautiful, slightly different, and bearing testimony to the work of wallers and stone masons. In places the dry stone walls date from the 16th century and can reach up to eight feet in height. The barns are characteristically sited on a hill, which means that there is a natural entrance on two storeys, so that the livestock can go below and the hay above. Cranesbill Barn reflects the traditional form of local barns. That is why the back door is upstairs and the front door is downstairs.

Pendragon Castle, said to be the home of Arthur’s father Uther Pendragon

In more recent history, the area has been subject to raids from the Scots, especially after the great Scottish victory of Bannockburn in 1314. The Eden Valley, just over the way, provided a natural route for Scots raids. Legacy of this period is the large number of fortified farms and small castles that lie around the upper Eden Valley. Brough Castle, Pendragon, Lammerside, Hartley, Waitby, Castle Howe and Wharton Hall lie in the immediate vicinity. Slightly further afield, well preserved examples of tower houses include Kentmere Hall and Yanwath Hall. Once upon a time, the countryside would have been dotted with similar structures.

Pendragon Castle is said to have been the home of Uther Pendragon, father of king Arthur, although the extant building is probably fourteenth century. Later, it came into the possession of Lady Anne Clifford. One of the first great preservationists, this lady owned a string of properties between Skipton and Penrith in the 17th Century. Lady Anne Clifford’s Way is now a very fine long-distance walk, which follows her route over the felltops of the Yorkshire Dales between Skipton and the Eden valley.