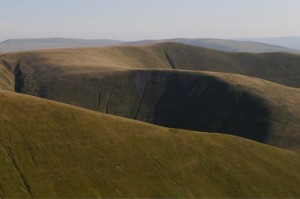 Newbiggin-on-Lune is set at the foot of the Howgills, which form a triangle of mountains between the communities of Ravenstonedale, Tebay, and Sedbergh. The Howgills make for peerless walking terrain. Wainwright considered them some of his favourites.They are still relatively undiscovered, and you can walk here for miles without seeing another soul. These hills are notable for their rounded summits and long ridges – and are frequently compared to elephants lying down. They are composed of Silurian grit and slate: it is a very ancient rock, which has undergone severe weathering. It is grey-green in colour, varying from light to dark grey, is crumbly, and forms extensive outcrops at Cautley Crag and Black Force. Elsewhere, these fells are mostly covered with grass and reeds, with bracken on the flanks, and moss and sphagnum on the boggy parts. 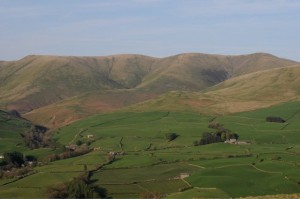 Calf and Calders from Fox’s Pulpit

In a relatively compact area, the Howgills  offer a great concentration of summits around or over 2000 feet, connected by ridges and divided by steep valleys. Once you have made it up the slope to the ridge tops, the walking is easy and exhilarating, and affords a balcony view of the surrounding countryside: the Lune Valley, the Orton fells, the Yorkshire limestone country, the North Pennines, and the eastern Lake District.

Newbiggin is by the northern edge of the Howgills, underneath the distinctive and graceful dome of Green Bell. The northern edge of the Howgills is notable for three great valleys and the ridges between them. These valleys are Weasdale, Bowderdale, and Langdale, and each of them has a hamlet named after it at its foot. Aside from these settlements, the valleys are lonely, with barely a tree, never mind a road or farmhouse. There are some tracks, occasional tumbledown sheepfolds, sheep, and fell ponies – and that’s about it for signs of the human touch on this land. If you want solitude (and Wainwright loved it), the Howgills are your place.

Weasdale runs for three miles from the foot of Randygill Top to its hamlet, and dead straight for much of its length. A favourite local walk is the Weasdale Horseshoe, which does a complete circuit of the ridges round the valley, taking in Randygill Top, Green Bell, Hooksey and Stockless. 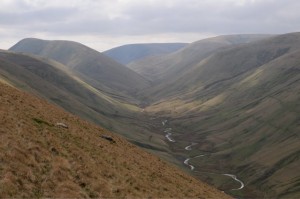 Bowderdale is twice as long as Weasdale, at six miles. Somewhat obscured from the upper Lune valley by a spur of mountain, it is one of the loneliest places you can find. A track leads up the bottom of the valley in a graceful curve. Just over half way up the valley is Yarlside, which with its steep sides and stepped summit is one of the highest and most distinctive of the Howgills (it’s top left in this picture). Past Yarlside, a low pass will take you towards Cautley Spout. The main track however rises gradually on the East side of the valley towards the central massif of the Howgills, and eventually takes you to the highest summit in the range – the Calf.

Langdale, Howgills, from near the Calf

Langdale is nearly the same length as Bowderdale and begins at the central massif of the Calf. It is however more complex than the above-mentioned dales with at least three forks gracefully curving inward rather like layers of an onion. This valley is marvellous to explore, especially the summit of Simon’s Seat, but be careful not to end up on the wrong ridge! It’s usually about 500 feet down to the bottom, and 500 feet up the other side.