The Railway Walk from Newbiggin gives a fascinating insight into the works and monuments of a Victorian railway. The railway was called the South Durham and Lancashire Union Railway, and was opened in 1861, and lasted for just over a century. First, one should admire the old station. Best seen from across the A685 on the Weasdale Road, the station building is now a private house, and the original gardens are in excellent order. It has a twin at Lartington in Teesdale.

Across the A685, the paved road towards Brownber Hall takes you to the start of the walk proper. Administered by the Cumbria Wildlife Trust, this stretch contains an abundance of wild and native flowers and plants. June is probably the best month, but it’s a wonderful walk any time of year. 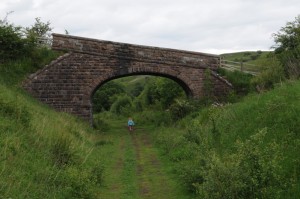 Stone overbridge on the railway walk

The walk takes you through cuttings, and over original embankments and bridges fashioned by navvies and masons in the mid-19th century. At an open spot about a quarter of a mile in, there is a minor railway summit at a place called Sandy Bank. Hard to tell, but this is the watershed between the Lune and the Eden rivers. Here, you can see the brick foundations of what was a signalbox. Soon after this comes the fine stone-lined cutting: it is narrow, for a single track. Further on, after a fine overbridge, there are two platelayers’ cottages and a lime quarry with some large lime kilns right by the railway. This stretch takes you through the lonely valley of Smardale. There are no roads round here. The occupants of those cottages would have got to Kirkby Stephen by walking or by hitching a lift on a train.

The line passes over Smardale Gill viaduct, nearly a hundred feet over the beck. This viaduct was saved from demolition by the Northern Viaduct Trust, which now owns several viaducts on this line. It has fourteen arches, crosses the valley with a graceful curve. There is an option to return by a different route either from the overbridge mentioned above or from the end of this viaduct, by a narrow path on the side of the valley that takes you past some quarries that were used for the viaduct, then back along a packhorse route including the fine bridge across Scandal beck known as County Bridge. The line at this point clings to the side of the limestone gorge of Smardale. Just before it opens out again, you find an even bigger viaduct. This is called the Smardale viaduct, and carries the Settle-Carlisle line. At over 120 feet, it is the highest viaduct on that line and bears the date 1877, The railway walk passes under it. A short distance after this is the hamlet of Smardale, which used to have its own halt on the line, and contains the rather impressive Smardale Hall. (Incidentally, the caramel shortbread made there is rather good). From here, you can easily retrace your steps. There are some other eminently recommendable routes back to Newbiggin. One is to continue to Crosby Garrett, with its own viaduct and a wonderfully-sited 12th-century church, and back across the fells past Bents farmhouse and Brownber. Another takes you across the fells to the East of Smardale, following an old drover’s route on Ash Fell, down over a packhorse bridge known locally as County Bridge, and then up beside the 16th-century dry stone walls of the Wharton Hall deer park. In their heyday, these walls were over eight feet high.

You can also walk on this line in various stretches the other side of Kirkby Stephen. A new car park just after the bridge on the road to Nateby gives access to a wonderful walk on the line. It is buggy, bike, and wheelchair accessible. This stretch takes you over two more viaducts, Merrygill and Podgill, on the way to the little village of Hartley, and offers a fine view of the upper Eden Valley. 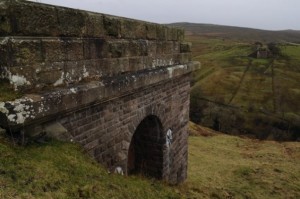 Pier of Belah Viaduct, constructed in 1861 by Thomas Bouch, and pulled down in 1962

The architect of these marvellous engineering works? None other than Thomas Bouch. It’s true that he designed the hugely ambitious and ill-fated first Tay Bridge. But before this, he was a tremendously accomplished and dedicated railway architect. This railway line demonstrates some of his finest work. Sadly, the grandest of all the viaducts on this line was dismantled in the sixties. This was the Belah viaduct, which lay close to the village of Barras and Stainmore summit. It used to be England’s highest viaduct, running 196 feet over the Belah river. It was made of delicate tubes of cast iron, and was constructed over just four months in 1861 – a revolutionary accomplishment. The piers of this viaduct are still there, and bear witness to its majesty.